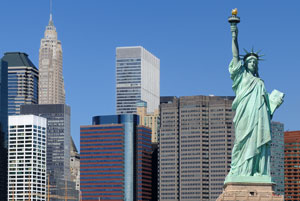 However, New York has created a devastating Estate Tax “Cliff” by phasing out the benefit of the New York Exclusion Amount for estates that exceed 100% – 105% of the exclusion amount.

Addition of a Three Year Look Back Provision

Other major changes made by the new law are to:
1)  repeal New York’s generations skipping transfer tax; and
2) allow a marital deduction for non-citizen spouses.

With respect to the first type of trust, for years, wealthy individuals have set up “incomplete gift non-grantor trusts” to avoid the New York income tax.  The idea was that if you created a trust in another jurisdiction (with the assets and trustees outside of NY) then New York would not have the right to tax the income earned in that trust to the extent income was retained in the trust.

With respect to all other trusts, New York will now tax the distributions of accumulated income to New York residents.  However, the State will offer a credit to the extent a tax is paid to another jurisdiction.

Important Items That Were Considered But Not Changed

1)  New York has not adopted the concept of portability of the estate tax exemption; and
2)  New York had considered a maximum 10% tax rate, but decided to keep it at 16%.