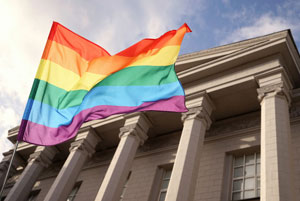 There was a significant court decision back in June of this year regarding the rights of same sex married couples.  The New York Federal Court concluded that the surviving spouse of a same sex married couple is entitled to an unlimited marital deduction for purposes of federal estate taxes.  Windsor v. U.S., 109 AFTR 2d ¶ 2012-870 (DC N.Y. 6/6/2012)

Prior to this case being decided (and still the law for most of the rest of the country), when one same sex married partner dies leaving assets to the surviving spouse, only the estate tax exemption amount can pass free of estate taxes.  Anything over that would be subject to the federal estate tax.

The Court in the Winsdor case ruled that the so called “Defense of Marriage Act” (or DOMA) effectively allows for a same sex married couple to be taxed when a traditional married couple would not.  They declared that there was no rational basis for this outcome and therefore the law violated the equal protection clause of the Constitution.

It should also be noted that the Obama administration flatly refused to support the DOMA.  The Attorney General’s office usually makes an appearance to support all laws that are being challenged.

While the New York Federal Court made an important ruling, one ruling does NOT make it the law of the land.  You should note:

While the ruling itself focused on the federal estate tax marital deduction, it can be taken much further.  Other potential benefits include the ability to roll over the surviving spouses IRA or 401(k), portability of the unified credit, the ability to file joint income tax returns and the ability to collect Social Security.

Because of the uncertainty surrounding these matters, it will always be best to pay your taxes and request a refund from the government to avoid any penalties.  When the IRS denies such payment, which they assuredly will, you will then need to make a decision as to whether you want to take further steps to get legally involved in this fight.

For those of you who don’t have the inclination to spend a lot of time and money fighting, you should engage in proper estate planning for non-traditional couples.